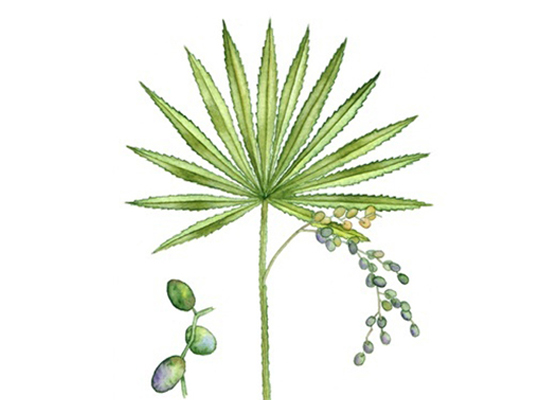 Among other health benefits, the plant can treat an enlarged prostate gland. When used with other plant extracts including nettle root and pygeum, Saw Palmetto has proven to be effective in treating prostrate problems in Italy, Austria, and Germany.

For over a century, Saw Palmetto has been used to treat benign prostatic hypertrophy. Prostatic hypertrophy refers to the swelling of the prostate gland. The condition leads to various symptoms like a weak urinary stream, frequent urinary frequency and finding it hard to initiate urination. Most men develop prostrate health related conditions when they age. Prostate cancer is one of the major chronic illnesses that most many suffer in their old age. Saw Palmetto helps to prevent testosterone from converting into metabolite dihydrotestosterone. In so doing, the plant prevents hormone-related cancers in men.

Modulating hormones is one of the advanced ways that individuals are using to avoid adverse symptoms of aging and restore vitality. The method involves keeping pregnenolone, dehydroepiandrosterone (DHEA), progesterone, cortisol, estrogen, testosterone, and DHT in proper balance.

Extensive scientific research has concluded that Saw Palmetto could be used to prevent testosterone from converting into DHT. The increased production of DHT in old age typically leads to an enlarged prostate.

Conversion of testosterone to DTH also leads to hair loss or reduced hair growth. Saw Palmetto is indeed an effective treatment for men who suffer from baldness. Some drug supplements that are used to control baldness lead to severe side effects including erectile dysfunction. Saw Palmetto has proven to be the preferable solution because it does not have such side effects on the patient.