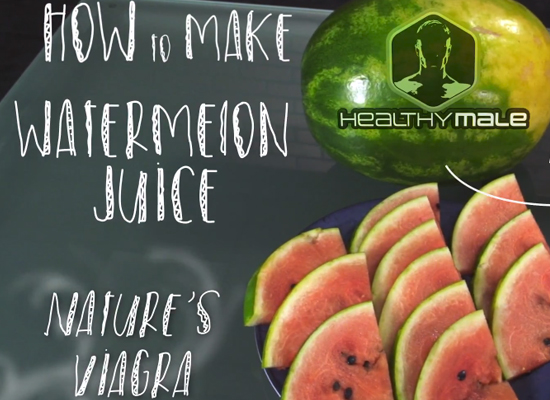 Erectile Dysfunction is a condition that affects almost 40% of men over the age of 40. While frustrating to deal with, there are ways to help.

Healthy eating and staying active is the best way to fight ED, along with medication such as Viagra or Cialis.

But did you know there are herbal remedies that mimic the effect of medication as well?

Homemade watermelon juice, aside from being healthy, acts as an herbal cure for erectile dysfunction.

Nutritionally, watermelons are loaded with vitamin C and A, they’re also heavy with Lycopene a natural antioxidant, which is known for fighting heart disease and is good for the prostate.

They also contain vitamin B6, which helps fight anxiety.

Watermelons are heavily concentrated with an Amino Acid called Citrulline, once consumed it’s converted into the amino acid Arginine that relaxes and dilates blood vessels in the same way that Viagra works.

Now the great thing about this juice recipe is it’s simple and uses the natural characteristics of the watermelon to promote healthy circulation.

All you need is a Juicer, a ripe watermelon (*with seeds!) and some ice. First cut open the watermelon and cube out the center red portion, a melon baller will work too.

Now fill up the juicer and run it until it’s completely liquid.

Finally, pour it into a glass of ice if you would like it chilled.

You can also make extra, watermelon juice will store in the refrigerator for up to three days and 30-60 days stored in a freezer.

The best way to fight Erectile Dysfunction is with a healthy, active, well-rounded lifestyle.